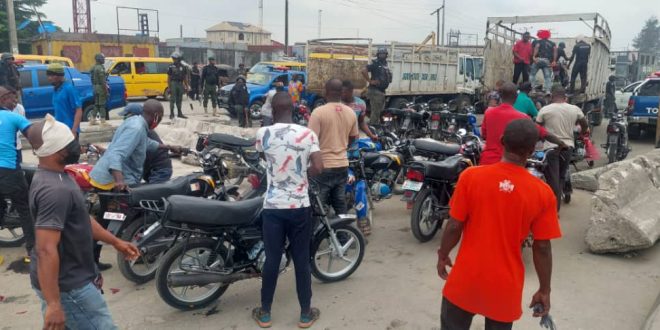 The Lagos State Taskforce has denied involvement in the death of a resident during enforcement of Okada operators at the Second Rainbow Bus Stop in Amuwo-Odofin.

The Chairman of the Agency, CSP Shola Jejeloye, who led the operation, debunked the media reports, stressing that the false claim of a disturbance and death of an unidentified individual emanated from mischief makers bent on causing dissatisfaction between the public and the taskforce team.

According to him, the enforcement exercise embarked upon to apprehend Okada operators plying illegal routes along the axis was well coordinated and smooth without any opposition from commercial motorcycle operators or bystanders.

CSP Jejeloye said: “Activities of the Lagos State Taskforce are carried out with the highest degree of civility and regard for human life. We have been to Second Rainbow more than three times this year to carry out enforcement operations and have never recorded any injuries, talk less of loss of life. There was no provocation at all during yesterday’s exercise so the claim that we fired live ammunition at Okada operators is completely false”.

The Taskforce Chairman acknowledged that enforcement operations are usually not people-friendly but the Agency ensures that human lives and property are well protected during regulatory activities, stressing that traffic offences are not criminal in nature.

His words: “It is better to let 20 guilty traffic offenders escape than let one innocent individual lose his life. I always address my officers and men on the need to embrace civility and protect human lives during enforcement operations on the ban on Okada operators across the State.

“If things get heated up, the maximum action we can take is to fire teargas and canisters into the air to disperse them. Firing live rounds is excessive and can never be from any member of the team”.

Promising to continue enforcing compliance with the ban on Okada operators in the affected Local Government and Local Council Development Areas of the State, Jejeloye gave an assurance the objective of ensuring that Lagos remains safe, clean and habitable for all residents will be achieved.