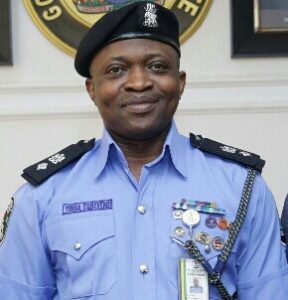 CSP Olayinka worked briefly as a Registrar of Cooperatives with the Lagos State Ministry of Agriculture & Cooperative between 2001 – 2002.

Between August 15, 2002 and February 2004, he was at the Nigeria Police Academy (POLAC), Wudil in Kano State where he was trained as a Cadet Assistant Superintendent of Police (ASP).

He was appointed as the Chairman of the Lagos State Environmental and Special Offences (Enforcement) Unit (Task Force), Safety Arena, Bolade-Oshodi, Lagos by the Executive Governor of Lagos State; Mr. Akinwunmi Ambode on March 10, 2016.

CSP Egbeyemi has attended several courses, both at Home and Abroad, which include; Peace Support Operation and Anti-Terrorist Course at the Prestigious Centre of Excellence for Stability Police Unit (COESPU) in Italy, Combat craft operation at Gwoza, Borno State, Leadership and Citizenship Training at Shere Hills, Jos Plateau State.VIP protection and Aide-De-camp (ADC) Induction course at Police Staff College, Jos, Plateau State in July, 2011.  Ad-Hoc duties include; Joint Task Force (JTF) with the military in Potiskum, Yobe and Kano State, engaging the insurgents in 2012 and 2014 respectively.

He is a member of International Association of Chiefs of Police and has attended the IACP Conferences at Philadelphia, Florida, Chicago and San Diego in California 2013, 2014, 2015 and 2016 respectively in the United States of America.

CSP Egbeyemi also participated at the ‘South-West Regional Security Management Course (SWRSMC)’ being put together by Nigeria Defence Academy (NDA) and Office of the Special Adviser to Lagos State Governor on Security and Intelligence. He obtained a Diploma in ‘National Security’ at Galilee International Management Institute, Israel in December, 2018.

He is a prolific writer, Poet, Strategist who also enjoys imparting knowledge about the African Heritage.

He is happily married and blessed with children.